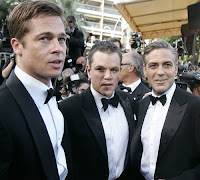 George Clooney is a good guy. If there is a definition in the dictionary for good guy, there should be a picture of him right next to it. Now, we all know George isn't Italian, but he might as well be. He's taken a strong interest in the Italian culture and actually owns a villa in Lake Como, Italy. So, I guess I will declare him an honorary Italian.

OK, so moving onto why he's such a good guy. He recently organized a charity event in Venice, Italy with his other celebrity Ocean's co-stars--Damon, Cheadle, & Pitt, which raised millions. Now this past Thursday, he coordinated and participated in another charity event where in total he and other celebs like Kid Rock and Bono and Scarlett Johansson raised a whopping 14.57 million for the people of Darfur.
I think its amazing and honorable that George Clooney has goals outside of Hollywood and uses his celebrity to help others. Bravo George.
http://tinyurl.com/5wjg6h
(Image- AP)
Tweet
Posted by Italian American Girl at 5:51 PM

-a poignant use of celebrity.
Intention without action is useless.

a poignant use of ones celebrity.
Intention without action is useless.

Its nice isn't it? Other celebs should do more, follow George's lead.