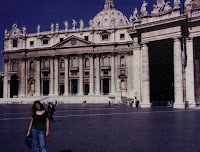 Recently the Vatican announced they've launched social media pages for Pope John Paul II as a way for the world to connect with the Roman Catholic Church's message.
The sites launched are Facebook and YouTube. Here you can see and connect with the world about Pope John Paul II. The Vatican launched the pages in preparation for the beatification of Pope John Paul, which is the last step before sainthood, which is set for May 1st.
In a world of instant communication and no communication among the youth. It's a positive step for the church to connect with the world and youth through social media. My theory on social media is to compare it to being in a room while people are talking, if you're not in the room, no one will know what you've said, saying or want to say. Its always to be better in the room and send the right messaging, whether it be a brand or person.
To learn more about the social media pages launched by the Vatican read this article here:
http://religion.blogs.cnn.com/2011/03/15/vatican-announces-facebook-youtube-pages-for-john-paul-ii/
*** The picture above is COPYRIGHT OF ITALIANAMERICANGIRL.COM & Italian American Girl 2011 -- You must ask permission for re-use. ***
Tweet
Posted by Italian American Girl at 8:19 PM

Thanks for sharing the information regrading it.. I was not aware of the facts related to it.. I ma glad I visited here and come to know about it..