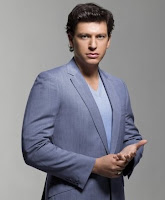 Patrizio Buanne; his incredibly sultry voice and wonderful Italian demeanor, makes him one of the most unforgettable singers today. Patrizio's singing has been compared to the best, like Tom Jones and Julio Iglesias. He's a younger generation singing standards with an incredible passion and presence you can only experience while listening to one of his songs or seeing him in concert. He spent this last year touring the world singing classic Italian standards (not opera)and some of his original and newer music, which is set for release on a new album in 2011.

We had the opportunity to sit down with Patrizio and get a little conversation going about some of the more important things. Read Patrizio's interview below:


Q: I think what sets you aside from many artists is the fact that you have such a distinctive voice, as a child did you realize you had a special talent for singing?

Thank you very much-I personally only realized that I had some talent and interest for singing when I sang along in the original key that the artist recorded the tune and everybody who heard me doing that, asked me to sing another song-even though I only subconsciously sang along while playing with my toys at the age of 4 years when my parents recorded their LP’s onto cassettes to be later played in our restaurant. I was around 10 years old when I sang in public and 12 when I had my first official performance in front an audience. When I was a teenage I was more interested in forming a band or look out for talent competitions than going every weekend to a disco.

Q: It seems as if you were brought up with the best of both worlds. How has your cultural up ringing affected your musical career and style?


Singing was always very natural in our home. While my mother would cook in the kitchen she would sing loud and my father the same while shaving or generally when we went for a drive-playing music loud in the car and we would all sing loud. My parents were both very passionate about music, even though none of them could play an instrument. Every week my father would bring home the latest releases of Italian hits or simply play old classics and traditional Neapolitan songs pointing out that the music once upon a time was better. Well, in fact I was not as amazed for a long time with what was played on a regular basis in the 80s and 90s on the radio, so I naturally was influenced by standards or later I discovered also the American Rock’n’Roll music of the 50s and 60s.

Q: You’ve become a major musical influence in the genre of “standards,” which salutes major singers such as Dean Martin and Frank Sinatra, what are your hopes for this type of music and do you think it has a place with younger generations?


I believe that we humans learn on a daily basis about each other and our cultural boundaries, that explains why now in the 21st century we realized that good music is timeless and it has quality while other things are on one side contemporary and fashionable but on the other side trends and counter trends invented by the music industry. All the electronic music is getting back again to real instrumentation. Music is culture and culture is here to share-it brings us together. You can feel the difference when something is “real.” A good record can move you and make you move. I like all sort of music genres as long as they are performed credible to the strength and are honest. There are a lot of talented young people out there, but sometimes I have the impression that the industry is afraid to build them up, as this would mean “RESPONSIBILITY” instead they are looking for some one hit wonder and quick money-THAT is why we are not making any music history. I am at a stage of my life and career where I do not care what others do or people say, but I simply do what I feel and interact with my fans and team. I consider myself though I must say fortunate that my mindset and taste is not so eccentric that I have to be commercialist. I guess that is what attracts a lot of young people to encourage to do what they really feel. Yes, I agree music once was better –but my motto is: music will be better tomorrow.

Q: Your career is taking off and your last albums were a huge success, what are your plans for the next album and what inspires you to sing, create and or write your music?


“Never change the recipe of success” that was the thought when I started recording my new album. So it is basically a continuation of what people know about me but this time I wanted to upgrade my work and level, by employing a known producer and recruiting a stronger team that would give me the chance to record at the Capitol building in L.A and to work with the best musicians that can be. It is also very important for me to sing more of original material, simply because I believe that it is about time to share new songs rather than just making them your own. My actual producer has worked with big artist such as Celine Dion , Michael Jackson, Barbara Streisand or Frank Sinatra, but is also responsible for the great sound and success of my young colleagues the Canadian singer Michael Buble or Josh Groban. My inspirations are people and my environment as well as my upbringing. I mean topics that are important to talk about. Love, friends and of course the sound that I have in my veins. Dolce Vita Italiana. This time it is a bit more relaxed. It is “making you feel good” record.

Q: With your new album, what types of songs will we hear and why?

Q: You’ve achieved amazing success around the world, what do you want to see for your career here in the United States?

I am a person that never expects anything. The less you expect the better and bigger the surprise is. Of course I have been working very hard to make this new record a worldwide hit album that can also cause a stir in the US. I believe that the US is the entertainment capital of the world, so having some sort of respected recognition would mean a lot to me and my family. At the same time I am happy with every smile and applause people give me where ever I am in the world. People are people, I treat everybody the same. And I am certainly looking forward to be back in Australia, South Africa, the UK, Europe and of course the US playing some wonderful shows.

Q: What kind of influence do you think your Italian background brings to your music and presence as an artist?

Well, it is the melody, the stories, the lifestyle, the upbringing that creates a person. No matter if one has an Italian name or not or if someone loves pasta or not. Being Italian is a culture not just a nationality. Like any other culture is. I don’t know what influence my Italian upbringing brings to music and presence as an artist, it probably just feels different and comes across different if you compare it to other artists. If you even compare it with classic Italian music such as Bocelli or Pavarotti it is different. It is like a wine that was grown in a different environment. The audience chooses which vibes they like. Is it Latin, is it country western, Italian or oriental or R’N B-? If you like a Mediterranean, romantic feeling than you're right with my music and persona. You chose the right dressing for your salad.

Q: How important is it to you as someone with an Italian background to preserve our culture and maintain our traditions?

I am Austrian (Vienna) born to Italian parents (from Naples). Austria is a neighboring country to Italy, so it is relatively close in distance (only 300 Miles to the border)and also culture. I was raised between these two “homes” and it was never really important to me to preserve anything as I was not brought up far away like in the US, Canada or Australia, where the culture is totally different. But when I noticed that people love my culture and still know very little about it. I started to put a compilation of my favorite Italian songs together and wanted to introduce these to the non-Italians as I found it quite disturbing that people would consider Italian music only opera or songs like Volare. It is like saying our food is only pizza and pasta. Did you know that the hit song “You don’t have to say you love me” is actually called “Io che non vivo?” Or that "A man with out love” is called “Quando m’ innamoro?” and that Enrico Caruso recorded all the traditional folk songs that were sung by fishermen or the ladies who did the washing, with orchestras and they became classics.

Also, I hate the fact to be compared with a character from the Sopranos or the Godfather. See that was important to me. Italy is more than that. It is time to move on and explain that. The Italians all over the word call me “The ambassador of the Italian Dolce Vita” and yes, I will maintain what I can not help giving up. I am myself-an Italian boy.

Q: You’ve sang with so many amazing artists through the years and performed for enormous audiences, who would you like to do a duet and or collaborate with and where would you like to perform as your dream location?

With Celine Dion at the Madison square garden in New York.

Q: Lastly, what are you plans for another USA tour and when can we expect to see your new album in stores?

I will be back in the US every now and then when there is a show booked by the local promoters, but the big tour that goes hand in hand with the release of my new album; as I am currently promoting my album in Australia, South Africa, Asia and of course Europe. Be patient and check out my album, learn the songs and sing along when I am back to perform in your city, ciao, ciao!


Grazie Mille to Patrizio Buanne for this wonderful interview and to his management team for coordinating! Thank you!

For more on Patrizio Buanne:
http://www.patrizio.tv/


SEE Patrizio in concert : (I'll be there too!)
Count Basie Theatre-- Red Bank, NJ - Click For Concert Info
Tweet
Posted by Italian American Girl at 10:03 AM