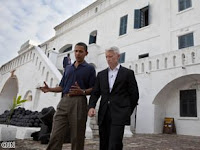 As I watched Anderson Cooper tonight on AC360, CNN-- I was so intrigued by President Obama's responses on how and what it means to return to the place of your ancestral roots. He emphasizes how some African Americans come to Africa and become overwhelmed by the feelings of cultural pride that some even relocate, but others visit Africa realizing how American they are and could never live there. I think the concept of returning to your cultural roots can make you realize many things and as Italian Americans we can relate to that cultural feeling of pride and the emotions that come along with returning to your roots. The President visited many places in Africa and including a place where many Africans were tortured, which was an important and incredibly emotional part of history. As we move along with history, we are witnessing an African American president returning to a part of his cultural origin and listening to his ideas on how cultural identity molds your life. I think as Italian Americans or any culture-American you can relate to this conversation, thought and progression of cultural history.