Italian American Ancestory- Discovering My Ancestory By Finding Out More About My Nonno, Who Was Killed In Action During World War II. 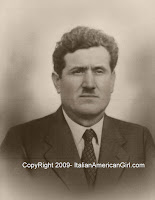 As a first generation Italian American, I am lucky because I know my family tree with little or no time gaps, knowing Zio or Zia is a reality for me. I don't have to go to the town hall of the town where my parents came from and research names and family members, I know where they live and have been to their homes a bunch of times. Now, when it comes to my Nonno, my father's father, its a different story. I never knew him, just always knew him from this photo on the left. My father told us the story about his father a hundred times over the years but it just always seemed vague.

The only thing I knew about my Nonno, was that he was sent to fight the second World War in Northern Italy and never returned. This was the whole reason in my father's later life that he ended up traveling to America to make money for his family. My father assumed the role of father to his siblings and was responsible for making money and sending it back to Reggio Calabria. He didn't travel to America till later in life but as a 12 year old child, my father was basically forced to quit school and go out and find work, so the whole family could eat. This was the true meaning of post war poverty.

Myself and my siblings never really knew the true story behind who my Nonno was, I think in Italian families sometimes we tend to not talk about things that hurt us and just pretend that by not talking about a person who passed on, somehow gets you through the pain. Maybe not all families, but I know that's how my family deals. I was always curious about my Nonno because as a kid you want a grandparent and especially me and my siblings. We were always at a disadvantage because any grandparent we knew was in Italy and the only time you ever saw them was when you went to Italy. So, "Grandparents Day" at elementary school was always a no show. I was the I-talian kid with no grandparents. ( I mean, really I always had a hard time explaining, yes I have a grandparent but he lives in Italy, so no I don't think he'll be making the trip over just for Grandparents Day at school today.)

We did have one grandparent and that was my mother's father. I had more of a relationship with him, but again not the one I had wished for because we lived a world away. So, I guess knowing and having a grandparent has always been something I longed for, and now that I am older I want to explore the history behind who my Nonno was. Until recently, which I find fascinating, the Italian government had mailed my aunt a letter stating, actually an official letter from the Italian military or veterans affairs, that my Nonno "officially" had been laid to rest in a military grave site in Northern Italy. He was killed in action, according to government papers so this was the last known information regarding his status when he reported for duty during World War II.

So, for those years during the war, my father as a child was left to know that his father was just killed in action, with no other explanation. To imagine more recently, to finally be sent a letter from the Italian government stating that your father is now officially recognized and laid to rest at a military grave site, is unreal. There is no evidence that his physical body was accounted for but the Italian government extended the courtesy of sending out an official recognition to my family after inquiring about his official status and grave location, which I think is noble.

My interest in knowing more about my Nonno will be further explored this summer when I visit my family and really ask questions about him and the official documents and locations. Just because I'm first generation Italian American doesn't mean my generation gap is flawless, I too have questions and my curiosity is definitely my driving force in staying connected to my roots. I will post again on this topic as I experience it, thank you for taking this journey with me. Tweet
Posted by Italian American Girl at 7:08 PM

Very interesting and fascinating story... I too never knew my Nonno on my Dad's side...he passed on when I was very little and within a couple of years, so went my Nonna. I know what you mean about families not talking much about it... you've inspired me to ask some questions, thanks. Good luck with your continued search for answers.
Ciao