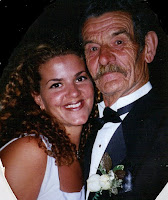 Today of course is Sunday and once again I am lucky enough to eat Sunday dinner at my parents home. I was happy today because my mother made the sauce with my favorite, porpetti. Oh, just amazing. Then, my father drew wine out of the barrel from the wine we made this past October. Now, the wine is not ready yet but he wanted to test its consistency and let me tell you the consistency could kick your butt. Its definitely strong. Can't wait for it to be completely done.

So, in the course of our dinner today, my father was very reminiscent about his life when he first was married to my mother. They were both saying how they would take trips to the Meadowlands race track, go into Manhattan, and visit with friends. I just think its so funny, that they actually went out and did fun stuff, I mean if any of you know Italian parents, you know its takes a lot to convince them to leave the house or do anything fun.

My father was talking about the times he worked three jobs and had money to do or buy anything for the family. He claims as he says, "volevo fare l'americano." He says there was almost a sense of romance to living, working and engaging in the American lifestyle. His greatest memory is buying his first American car, a Chevy Impala. I guess the vibe was very Frank Sinatra-ish. Everyone wanted to be American.

My father's feelings and opinions were pretty strong today as we also discussed the crashing economy and the declining American pride. I guess the idea of such a great America and the excitement he talks about from when he came to America, made me think.."Do I feel or think that?" I mean, he sounds like he's talking about a time that can never be duplicated. I guess it can't, but I wonder will we as Americans, Italian-Americans ever feel the romance or excitement of a great America again? Its hard to imagine right now, but I will remain hopeful. I'm here because the idea of a great America was real for my parents, so I will do my best and then some to keep that idea alive. Yet another reflective moment about growing up Italian-American.

your writing is so inspiring! I feel as if I know your family from the stories you share.
This week I will be celebrating 40 years in America and this post brought back memories from those early years.

Hi Carole,
Thank you for your kind words. I guess you can relate to my stories. Congratulations on your 40 years here. Merry Christmas!

It's nice to see that you guys share that special bond I wish all parents had with their children. My father is a disrespectful loud mouth who thinks he knows everything...