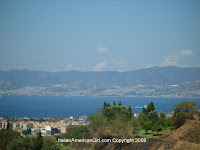 Well, if you've been reading my daily posts, you know my mother is in Reggio Calabria for the holidays. She ended up going to be with her sister (my aunt) this year, because her husband (my uncle) past away this last summer. The whole concept of having to travel half way around the world to be with your sister is really something. My mother has been in America a long time, close to 40 years. When she decided to marry my father and come here, she knew she was leaving and almost giving up seeing her family frequently. We have no relatives here, I think we ended being the only ones who left Calabria. This is why when I visit Calabria, its my family in full force. Here in the states, we are pretty much on our own. We have some "family" but no one I would consider as close as my real family, obviously.

So, I got a call from my mother this morning, telling me about what my cousins are doing and how everyone is preparing for the holidays. In Italy, when someone passes on they usually don't celebrate any holidays for at least a year. So, this year my aunts and cousins will be in mourning and not celebrate. Its tough for them because they really do stick to this respectful tradition, so even the kids kind of miss out on the holidays, but it teaches them respect and honor of those who passed. I am sure someone will give gifts anyway, so the kids have some fun.
On a lighter note, so I think my mother will also be visiting with the rest of her brothers and sisters, she's one of seven. Of which, my mother lives in America, her other brothers moved to Venice and one in Rome. So, we got most of Italy covered and America. In Italy, Christmas starts about a week early with religious days, which urges the Italians to go to church and prepare for your families. I think the important thing to mention that in Italy, Christmas is not consumed with the retail hoopla. Its somewhat, but never like here in the states. Most families gather for dinner, church and if anyone gets a gift its for the children. The concentration is on Christmas and religion.
So, I had to sit and listen to her go on about what fabulous meals she's enjoying and how she's going from family to family. When you're there, its just an incredible feeling of familiarity. I mean, for example, this is a true story. Over the summer I was walking down a street near where my mother grew up, and some old lady, says to me in Italian, "are you Franca's daughter?" But the translation in Italian, sounds better. I said, "yes," this woman was so amazed because she thought I looked like my mother and recognized me. Well, turns out this lady, used to go to sewing school with mother when they were teenagers. I mean really, its just so fascinating and of course I ended up in her house having espresso and biscotti.
I'll share one more example with you because I think this one was really great. We were at the marina getting gelato of course, when this guy walks up to my father and says, "do you know who I am?" Of course, my father doesn't remember, but says, "no, who are you?" Turns out this guy goes onto to explain, that when he was a small child, he went with his family to see my father leave the port of Villa San Giovanni when he first embarked on the first leg of his transatlantic voyage to America. This guy goes onto to tell my father, how that experience of seeing my father leave on a ship for America, left such an impression on him. I was amazed, I felt like my father was a rock star. So, when in Calabria, you never know who you're going to meet and what its all going to mean to you. Greetings from Calabria are always welcome.
Tweet
Posted by Italian American Girl at 2:13 PM

Lovely memories, and it sounds like your mom is enjoying her time in Calabria even with the sadness that surely is in the air...always great to be with family :)