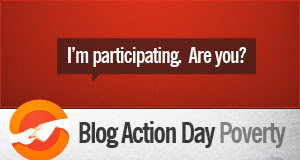 Well, many of you are probably wondering what is blog action day? In an effort to change the direction of conversation tomorrow on the web and in the media, blog action day will call upon all bloggers to discuss a large issue haunting the world today, poverty.

As Americans, we are lucky citizens of a country where poverty is only something you see on television or in a press report. The majority of us are lucky enough not to have to deal with this horrible reality. Poverty is a real topic in my household, where I had to listen and learn about my father's childhood stories of being so poverty stricken that he had go out and work at the age of 12, just so he and his siblings wouldn't starve to death.

Even in the hardest of economic times, the United States remains one of the richest countries in the world, but yet there are millions living here that are living in poverty. Its real. So, tomorrow contribute your part to this issue and discuss ways to make differences. There's a lot going on in the world right now but remaining focused on helping others is something we can do daily.

For more information, go to: