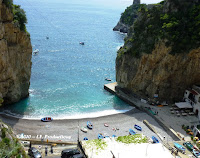 Of course, casual tourists or frequent fliers will advise you to visit Florence in Tuscany, Ravello in Amalfi and of course, Rome. However, it’s unlikely any of them will have you whip out your passport for Sarteano, Nerano or Praiano and all of these gems are worthy of any travel through Italy.

1. Sarteano – is a small comune in the Tuscan Hills just outside Radicofani, situated in the province of Siena. There are numerous agritourismos in the area, affording the tourist a true Italian experience with Nonna’s cooking in the kitchen. The picturesque villages of Cortona, Montepulciano and Montalcino are all within a short car ride and the nearby train station in Chiusi provides alternate transportation for day trips to Siena and Florence.

The area is rich in Etrusan archaeology, much of which has now been relocated to The Archaeological Civic Museum of Sarteano. By the way, the Museo is housed in a 16th century palazzo. Yes, there is a lot of history in this one small village.

For those seeking a spa break, the mineral waters which flow through this area have been soothing the tired muscles of weary travelers for centuries and there are several spas nearby, including several in San Casciano dei Bagni, such as Fonte Verde, which offers outdoor thermal, mineral-enriched pools.

2. Nerano – is a tiny fishing village in Massa Lubrense, located between Sorrento and the Amalfi Coast. It derives its name from the Emperor Tiberio Nerone, who would spend his summers on the nearby island of Capri.
It is accessible by climbing or driving through the hills of olive groves and a car does make your journey easier, although travelers may catch a local Sita bus from any of the major destinations such as Sorrento, Sant’Agnello or Meta. The beach in Marina del Cantone is lovely and picturesque but quite rocky. Don’t expect to find the white sand beaches of the eastern shores of the United States. Without a sunchair in Nerano, your day will be a lumpy one, for sure.

3. Praiano – is also a small fishing village along the Amalfi Coast. It is so small that cars drive on the sidewalks because people walk in the streets. It is situated between Positano and Amalfi.

Believe it or not, as small as Praiano is, there is a disco quite popular during the summer, L’Africana, along with the typical tourist sites of the Church of St. Gennaro on the sea and the Green Grotto, the poor step-child to the area’s more popular Blue Grotto on Capri.

There are numerous bed and breakfasts, as well as larger hotels, in the area and a handful of restaurants along the rocky beach, with one of the best being Trattoria Armandino.

Italy is a treasure trove of history, archaeology and seaside splendor for dreamy tourists who don’t mind wandering off the beaten path.

Lisa Fantino is an award-winning journalist and attorney and the creative force behind Wanderlust Women Travel™ and Wanderlust Weddings™. She also writes travel features for MNUI Travel Insurance and blogs as Lady Litigator™.
Tweet
Posted by Italian American Girl at 4:50 PM

Definitely have never heard of these places. :-) Think you'll ever write a piece on the Salento? My new home, I love it so.
Glad I thought to stop by - I've been so caught up myself that I haven't had a chance to reach out to fellow bloggers. :-)

Hi,thanks for sharing such a wonderful information with all of us..I will definitely visit these place in my next vacations..