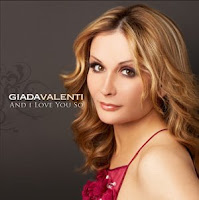 Brace yourselves for the beautiful and unforgettable singing talent of Giada Valenti. She's been in the United States since 2004, where she's been working hard on recording and releasing her music here in America.

Let me just say, Giada Valenti is by far one of the best Italian singers and songwriters of our time. Her style of singing and presence is absolutely stellar and just amazing to listen to.
She just released her new album this October 2008, called, "And I Love You So. "

Visit her site for details and to preview her music. She's scheduled to make several appearances for October and November including an appearance on the local radio show, "The Tony Mangia Show," based out of Wayne, NJ on WP 88.7 FM

she should sing with Ali Project