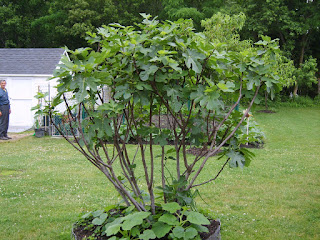 I will say yes, I love figs but like I was in fritelli hell..Ive now graduated seasons and have entered into fig season. The fig is like the most prized possession for my father. He grew a fig tree in his backyard, which is now not such a small tree. This fig tree is now producing tons of figs of which he meticulously nurtured one by one. By that I mean, there is a trick in getting your figs not to bust at the bottom so they can fully grow. My father takes olive oil and rubs each bottom of the fig so they dont crack. I mean this in an all morning event. The man has patience.

He loves his tree so much that like many other Italian Americans who try to keep their figs trees from dying in winter, he wraps it up like a mummy and neighbors would ask,"what does your father have wrapped up in the backyard standing straight up..?" The awkward answer, 'its a fig tree and you have to wrap up it all mummy-ish so it can survive the winter..yada yada yada. Most of the time their like...'oh that's so interesting.' But you know they're like those I-talians do such strange things.

So, now every time you walk in the door, you're offered a fig..and even on the way out. The other day, this is a true story..my father says to my brother, "wanta figa?" my brother says, "no, not right now," then my father gets pissy because he wants him to try the fig and say 'wow, that's a great fig.' There's always a reason for my father's antics. So, again, 'you wanta figa?" My brother, "papa, no, I said I don't want one right now." My father, "why?" My brother, "because"
My father, "come on-whats the big deal, just try!" My brother "OMG, you are relentless!!!, ok I'll have it." My brother eats one looks at me and says, "damn, they're good." I just look at him and laugh. My father just looks over like with a pompous grin and says "see --I tell you." Got to love it. We were laughing our asses off. My father the 'figa' guy.
Tweet
Posted by Italian American Girl at 11:35 PM

Thanks for the memory. My father and I would bury smaller fig trees in the fall and revive them between St. Joseph's Day and Easter. I remember visiting some Italian friends in Queens were they didn't have to bury or wrap because the tree was in a courtyard protected by brick walls which kept heat in the winter.

Thanks for the memories. I used to help my dad wrap fig trees and even bury young trees in the fall, reviving them between St. Joseph's Day and Easter.