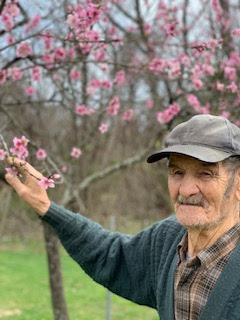 As Father's day is closely approaching, I find myself taking more and more pictures and documenting my father and his daily rituals.  This past May my father turned 89, he suffers a multitude of health problems and can't move around like he used to and requires a chair anywhere he goes, its been getting very hard for him as he loses his breath dramatically and can't go far like he used to.   Its been hard to see a man who has always been so strong physically slow down so much and be limited.  Although this is the current reality right now, he continues to inspire me.

So, as he slows down at this fast rate, I'm faced with thinking about all the great things about him right now and in my whole life.  My father's story is this:  He came to America in 1956 and took a ship ( The Olympia, and Andrea Doria, which are famous historical ships) to get here, it was a 10 day journey on his first voyage. This trip he made several times over the first years as he went back and forth to support his family after he made his first minimal money here in the USA.

My father landed on Ellis Island, as one of the last immigrant groups to actually dock there, but obviously the more modern version.   He settled in Newark, N.J., where my great uncle put him to work right off the boat.  My father also worked for the American Can Company, which was also ( American Can Company ranked 97th among United States corporations in the value of World War II military production contracts)

After earning some money, my father religiously sent money back to his mother and sister in Reggio Calabria, literally just to survive.

My parents both grew up very poor and poverty was common in Calabria.  Its was a very rural area (farm and agriculture) and with minimal work.  Even to this day if you're not in law enforcement, educator or government employee you're basically living the poverty line.  Today some families do well with their own businesses, but for the most part many emigrated out of Calabria and still do to this day and go towards either in Northern Italy or another country to sustain economic stability.

After World War II, my father was urged by my great uncle to come to America, so he could work and gain a better life.   The reason this all unfolded during that era was my father was the oldest of the family and was basically responsible for the family after my grandfather was killed in World War II.  My father's family never received official notice or my grandfather's body back from war, the government at the time sent a soldier to tell you that your loved one was killed in action.  It was a tragic time then for my father.  For my father when he was a small child he still remembers when German bomber planes were going over the mountains in Calabria and dropping bombs.  They were all living in bomb shelters built in the mountains, my father said there were actual true stories where German soldiers took Italian and American soldiers and would drown them in the wine vats.   My father also owned a goat who he loved that he said suffered a bomb injury from the shrapnel and eventually died.  My father was was just a little boy, can you imagine the horror?  Then fast forward to getting on a ship (mind you my father does not swim)  to a country you know nothing about because you have to make money and basically hope your family survives, it was the 1950s but even so, poverty was a reality. 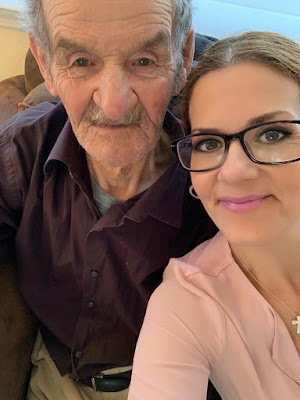 My father married my mother when he went back to Italy for a visit and year's later in the 60s, she came to the USA on one of the first ever Pan Am flights.  My parents ended up having four children and I am the youngest.  Growing up there was never a time I remember my father not working.  He worked his day job in construction and then would come home eat and leave again to hustle and work other side job till late at night and then wake up and do again the next day.   What I learned from him was the hustle.  He worked his ass off, invested in buying his first homes in Newark, NJ - he would buy, refurbish and sell when he could, he did this all by himself and obviously at a time when the American dream was accessible.   My father was always an entrepreneur, he was busy none stop, but one thing I always knew was that he loved me, if he was leaving early in the morning, which was everyday at 5 am - he would stop in our rooms and say good bye and even as a smaller child he would bring me milk in the morning.  I mean you just can't make it up, so as Father's day comes around the corner, I celebrate my father for all things he did, does, and continues to do.   Let's celebrate all of our father's and Papas.