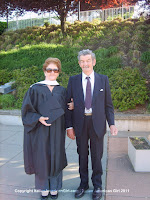 Amazing Is --
-- When your 69-year-old mother graduates college. A woman, who came to the United States in the 1960's after marrying my father in Italy. Not only did she raise four children, but she was also the brains behind my father's businesses.
In most traditional Italian families, the women really aren't that dominant, but in the case of my mother, she wore the pants -- and quite honestly my father didn't mind - and he was quiet proud of her many times.
All the while, she handled the business, but yet growing up we still had hot meals on the table and had to stay in line with her rules. My mother like I've said before is one tough lady, you can't mess with her or tell her what to do. She's traditional in an UN-traditional Italian woman way.
My mother's dream was to pursue her education here in the United States; because she was unable to do it when she lived in Italy, then she got married, and then she had kids..so it seemed the time was never right. Around the same time, and partially because I was the youngest and off to college, I think my mom felt inspired so she signed up for college.
The funniest moment was when I went with my mother to her university to sign her up, we went to the registrar's office and immediately the people would start asking me questions, but then I would have to say, "no, it's not for me, it's for her.." they were surprised, but in a good way. She managed to surprise many people with her drive.
My mother began taking one course here and there and then progressed into a full time student. She worked hard in every subject and come hell or high water; she always attended her classes. Let's say she was probably one of those annoying people in class who asks a lot of questions.. (LOL) I had the opportunity to meet some of her professors, who always made it very clear how fond they were of her and how amazing they thought her drive was for staying in college so long and being such a great student.
It took her close to 15 years to get her Bachelor's degree, but she did it.
Congratulations to my mother, the graduate. One of her American dreams came true.
Tweet
Posted by Italian American Girl at 8:30 AM

It's up to me and you to pay homage to that by attempting to replicate it.

Thank you for sharing. I'll check in again.

All my best to you and your family during this joyous Christmas season.

At the end of our trip we hadn’t paid close enough attention to our schedule, and so had about a day to spend in Antananarivo. We asked if we could pay extra and have someone to take us around town.

Thank you everyone for your amazing comments.. Happy New Year!