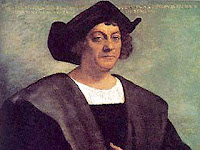 Auguri to all Italian Americans celebrating Columbus Day. It's a very important day to my family, because it signifies the day my father arrived in America to start a new life. He came to the USA to live the American dream and we still hold onto the dreams my father had when he first came here in 1956 and now we honor those who have paved the way for all Italian Americans. Celebrate with pride!
Columbus Day Parade - New York City
On Monday October 10, 2011 the best parade in New York City (in my opinion) the Columbus Day Parade is set to begin at 11:30 a.m. and run till 3:00 p.m. The parade always includes a slew of Italian and Italian American performers, bands and participants from all over the country and including from Italy. I love watching the parade on television, because you really have a chance to get the specifics on where people are from based on the hosting conversations with either Maria Bartiromo and or Joe Piscopo - we'll see who hosts again this year.
The parade begins on Fifth Ave and 44th Street, get in early and claim your spots, gotta love New York City but the commute can be a pain, so check out the tips listed in the links below.
For more details visit:
http://gonyc.about.com/od/autumninnewyork/a/columbus_day.htm
OR
http://www.columbuscitizensfd.org/announcements/2011-columbus-celebration-schedule-of-events
Tweet
Posted by Italian American Girl at 6:00 PM

I've only just found your blog, and love it. I was in Chicago on Columbus Day this year and happened upon the Columbus Day parade - it was fantastic! Such pride in Italian - American heritage. I'm from the UK, live in Italy and have strong links with the US - going to keep an eye on your blog for sure!