10 Reasons to Fall in Love with the Italian Language: By Award-Winning Author; Dianne Hales 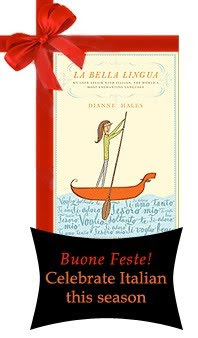 innamoramento
falling in love
by Dianne Hales
No English word quite captures the sensation of innamoramento, of falling head-over-heels in love, way beyond bewitched, bothered, and bewildered. But that’s what I am—an innamorata, enchanted by Italian, fascinated by its history, tantalized by its adventures, addicted to its sounds, and ever eager to spend more time in its company.


Why fall in love with this luscious language? Here are my top ten reasons:

1. Italian is “beautiful, fun and sexy.” That’s how people perceive Italy and its language, Stephen Brockman, a professor at Carnegie Mellon University, observes in an essay called “In Defense of European Languages.” “Why not?” he adds. “I can’t see anything wrong with that.” Neither can I.

2. No other language is more romantic. All the Romance languages evolved from the volgare (vernacular) of ancient Rome, yet none may have so many seductive ways of expressing amore: Ti amo, mio tesoro (I love you, my darling). Ti adoro (I adore you). Sei l’amore della mia vita (You are the love of my life). Vieni qui e baciami (Come here and kiss me.)

3. Everything sounds better in Italian. An ordinary towel becomes an asciugamano; a handkerchief, a fazzoletto; a dog leash, a guinzaglio. In English garbage is trash. In Italian, it’s spazzatura.

4. You can use your hands—a lot! In Italian speaking without gestures is like writing without punctuation. Hands become commas, exclamation points and question marks. Who even needs words when a tug at a bottom eyelid translates into "Attenzione!" ("Watch out! Pay attention!") and a straight line drawn in the air as “Perfetto!” (For more Italian gestures, click here.)
http://becomingitalianwordbyword.typepad.com/becomingitalian/2010/10/talking-italian-with-your-hands.html

5. Italian has become the new French. With only an estimated 60 to 63 million native speakers, Italian ranks fourth among the most studied languages—after English, Spanish, and French, which Italian now rivals as a language of culture and refinement.

6. You can immerse yourself in an Italian masterpiece. You can’t sculpt like Michelangelo, paint like Leonardo, or design like Armani. But you can read and speak the language that 14th century poets—Dante first and foremost—crafted from the effervescent Tuscan vernacular.

7. Speaking Italian may be the closest many of us get to singing. What makes Italian so musical are its vigorous vocali (vowels): An Italian “a” slides up from the throat into an ecstatic “aaaah.” Its “e” cheers like the hearty “ay” at the end of hip-hip-hooray. The “i” glides with the glee of the double e in bee. The “o” is an English “o” on steroids; the macho “u” lunges into the air like a penalty kick from Italy’s national soccer team, the Azzurri (Blues).

8. Italian may be our universal mother tongue. Dating back almost three millennia, its primal sounds—virtually identical to those that roared through Roman amphitheaters thousands of years ago—strike a chord in our universal linguistic DNA. According to some scholars, Italian may come closer than any other language to expressing what it means to be human.

9. You’re never too young—or too old—to learn Italian. Within weeks in an all-Italian class, English-speaking preschoolers understand everything happening around them. It takes longer as we get older, but learning a second language later in life offers an extra benefit: it helps stave off dementia.

10. Italians. British author E.M. Forster urged visitors to drop “that awful tourist idea that Italy’s only a museum of antiquities and art.” His advice: “Love and understand the Italians for the people are more marvelous than the land.” Indeed they are. And if you’re of Italian descent, cherish Italy’s language as a marvelous part of your heritage.

Dianne Hales is the author of the best-selling La Bella Lingua: My Love Affair with Italian, the World’s Most Enchanting Language.

Click below to hear more about how I fell in love with Italian:
LINK: http://www.youtube.com/watch?v=vIIYHQngqe4
Tweet
Posted by Italian American Girl at 8:18 AM