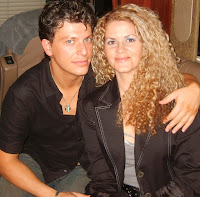 Last night I had the honor of attending a Patrizio Buanne concert, one of the most incredibly inspiring concerts I've been to in a very long time. Buanne performed live in New Jersey to a wildly excited audience, who couldn't get enough of him or his witty story telling throughout the show.

But, before the actual show, I was lucky enough to meet him and have a chat, which was arranged by his incredible and hospitable team. (Thanks AD) I have to say, as a television producer, I've met many celebrities and been around show biz for quite some time and usually don't get nervous, but because I was going to meet him for the first time -I realized I was going to be able to put a real person to this powerful voice.

First impressions are everything and he didn't disappoint. What I found most intriguing about Patrizio was his ability to convey his passion for what he was doing and how he wanted his music and career to be interpreted. He didn't hesitate to discuss how his fans have made an incredible impact on his career here in the United States.

Buanne's passion for his music and message are very obvious when he talks, you can't help but listen to what he's saying or how he's saying it. This is also true when he performs, at one point during the show, he sang a new song from his upcoming album, which was written by famous songwriter Diane Warren where Patrizio says, "you have to listen to the words" --- as he performed the song came alive, I listened and felt the depth, meaning and importance of this song.
Throughout the show Patrizio performed on piano and guitar, displaying his musical talents, I mean let's be honest.. this guy is for real. His voice, his performance, his charisma and musicality are second to none.
Patrizio Buanne is destined to become a household name, his following in the United States is growing and quite simply I don't think he can be stopped. His energy is very powerful along with his incredible voice.
A complete musical crossover into the United States market is on the horizon with his fans anxiously awaiting his next tour.
On a personal note, I would like to thank Patrizio for taking the time to meet with me. Grazie Patrizio!
Photo: Copyright of ItalianAmericanGirl.com 2010
Tweet
Posted by Italian American Girl at 5:56 PM

Hey--I'm an Italian-American girl too--first generation American and didn't speak much English until I was 5. I love the Italian culture and am quite proud of it and its customs. The lifestyle in Italy is one that should be universal. My relatives that are still there don't want to come to America--They say America is over there now!I believe it--they are so laidback and really enjoy life and its offerings and enjoy each other. Oh--how I want to go there--haven't been there cause I'm always working--organize a trip there and I will be the first to sign up and then I will run to the airport!! We have alot in common as I speak dialect also--calabrese--and I love it.

Hi Kathy,
Thank you for your comment. It's true there is no way to compare the Italian lifestyle with the American. I hope you get to go to Italy one day...it's an amazing experience. Grazie!