Top Ten In Rome- Eat As The Romans Do... 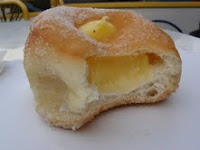 It goes without saying that when traveling to Italy, half of the fun lies in the food. This is precisely why we insist that When in Rome, you should EAT as the Romans do.

What better way to start out your day in Rome than with an Italian sugar and caffeine bomb.


1. A morning espresso or cappuccino at a reputable coffee bar in Rome such as the Tazza doro
Posted by Italian American Girl at 11:08 AM

Email ThisBlogThis!Share to TwitterShare to FacebookShare to Pinterest
Labels: Food, Italian Culinary, When In Rome Tours

Now I'm really hunger! I've been to 1/2 of the place on your list. Next time I'll try the other half. I can't wait to try Vecchia Roma as Amatriciana is my favorite

Ciao Elizabeth,
I know..the pictures alone make me want to eat! Glad the article gave you some ideas for your next stops in Rome!

Turkey travel agencey TTG is a friendly and energetic destination management company, emphasising innovation and quality service. Istanbulsightseeing offers a broad range of services, and the company is able to provide all the information and services you http://www.packagetoursturkey.com - http://www.touroperatoristanbul.com your customers need to plan a wonderful stay here in Istanbul and Turkey. Our staff is highly qualified, well informed, and our flexible service is designed to meet your every need. Our service covers everything from finding a suitable day excursion to planning a comprehensive itinerary for large groups.

We arranged a pickup from Sabiha airport with a name card and there was our driver - very prompt who delivered us safely to our hotel. Everyone was so helpful and our contact from www.privatetoursinistanbul.com was waiting for us to complete our trip details. Everything was very well organized and well explained to us. We were very impressed. The staff so helpful and friendly. The location was amazing. Everything we wanted to see was on our doorstep. We loved the bustle and activity on the streets. Even the traffic jams were fun. Breakfast on the roof terrace was great and in the sunshine, a lovely spot to start the day. We were collected next morning to drive to cappadocia tour. This again was wonderful though our guide talked too much at times, giving us too much information and not enough time to wander on our own. We had a bit of fun when a Greek guest disagreed with the guide on some points. I don't think the guide appreciated my friend and I not paying attention!! Our memories of the trip will be the excellent organization and lovely, friendly, helpful staff. Thank you all so much. Love Turkey with Privatetoursinistanbul......"