JOVANOTTI SET TO RELEASE A NEW ALBUM, "OYEAH" and EMBARK ON A FIRST NORTHERN AMERICAN TOUR. 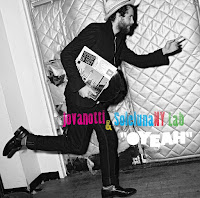 Oyeah was recorded in New York City during the Summer of 2009 during Jovanotti's series of residencies at leading Manhattan and Brooklyn clubs with the Soleluna NY LAB, a New York-based collective of musicians from Italy, the United States and Brazil.

The national media attention generated by Jovanotti's string of 16 sell out concerts in New York City during 2009 spurred the demand for a wider North American tour, the first leg of which is announced for April and May 2010. An adept stadium and arena headliner in Europe, Jovanotti's trans-Atlantic fans will get to experience a string of debut club dates in some of the most credible venues for rock and world music on the North American continent. Kicking off at Washington DC's storied 9:30 Club on April 22, Jovanotti and the Soleluna NY LAB band wind their way up the East Coast to Philadelphia, New York and Boston before heading into Montreal and Toronto where Jovanotti will make his Canadian debuts. The tour wraps in the Mid West at Chicago's hottest new locale, Lincoln Hall on May 6. Summer 2010 festival dates on the West Coast will be announced shortly.

I just purchased 28 tickets for the event in Toronto! I'm bringing in all my friends.