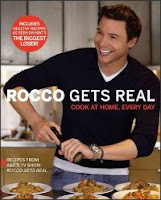 Celebrity chef and entrepreneur, Rocco DiSpirito has been busy lately. He had a great run on the hit television show, Dancing with the Stars, where he showed off his dancing and ballroom skills. Now, after coming out of a busy dance schedule, Rocco released his new book, "Rocco Gets Real," a great book for everyday Italian cooking. Not only is Rocco touring the country with his new book release and signings, he's also hosting his own show on A&E, called, "Rocco Gets Real," which airs on Saturday mornings at 10:00 am. Check Rocco's listings for book signings, he maybe in an area near you.

http://www.roccodispirito.com/
Tweet
Posted by Italian American Girl at 9:35 AM