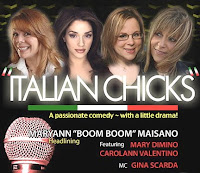 I am a comedian, singer/songwriter, musician, actress and a former banker!!!!

As a child, every Sunday in my home was like bad Italian dinner theater. They all came over in droves. One day, after dinner and before cannolis, I got up on the dining room chair and sang!!That was it! At five years old I knew exactly what I wanted to be when I grew up. A performer! That was a blessing and a burden.

I made my living for many years as a performer, but questioned my own mortality in the business. After my Italian father made me think about it. “Marianna! Whenna you gonna getta da real job?” I began to think… “The last thing I want to do is end up being 65 years old, singing misty in the Poconos in a sequence gown.”

I was the youngest of 4 children. My Father was born in Reggio Calabria and my Mom was born here, however her family was born in Naples. At a young age I knew we were different! Not the average American family for sure. All I know is that I was so intrigued with this culture, the language and the food.

One by one, year after year my Dad sent for his family. They lived with us until they secured employment and then moved on. With each cousin came a new experience for me. I learned that they all had been promised when they were born. I never knew quite what that meant until my cousin Tina’s future husband arrived in America. That was the only part of the culture I wanted no part of !!!!

They all shared different stories of their homeland, the farms, the music and the food, ahhhh the food!!! It was like a visceral fairytale for me. We received boxes from Italy filled with cheese and tuna. Candy, oil and of course photos. I can still remember what that food tasted like, smelled like!

Then my Dad’s Mother finally came to visit. I was in awe!! She was this small woman with braided hair around her entire head. Her clothes were in layers. Each night I would sit with her and she would hold up a hair brush and say, "Spazzola per capelli” – ah.. hair brush and so it went. Any time she had something in her hand she would tell me in Italian ad I locked it in. Yes, we were different. We were passionate people. Loving people. People that talked of Italia like it were 5 miles away.

Proud people, people that valued tradition and the family.
Not unlike many other family’s that have migrated to this country from other counties. Which is why I always valued diversity. When I hear people say, “these people come here and take over the county,” does it anger me? You bet it does! Why? Because I am the child of an immigrant that came to here make a better life.

But for some reason when my Father SAID, “get a real job”! I thought he meant, “you can't do it can ya”? I took it as a challenge. So I walked into the local town bank and got a job. A teller!!! I was trained and was finally given a window. The mistake they made was giving me the drive up window, why? Because it had a microphone!!! That was IT! I was doing my best James Brown impersonations. Jump back- kiss myself! Until I literally broke the drive up…

Yes, I got a real job and became successful by accident! As a BANKER! I continued to multitask performance and banking. My prestigious career culminated as VP of a major financial institution. However, one day - just 3 years ago - the “suits” got to me. I was a sales coach. It was my job to get the Team to drink the Kool Aid and coach them on selling to the customers need. My seminars were very motivational and I would always say, if you have always wanted to be doing something else and your here because you just need the money – then you need to go home and re think where and why you are here!

As soon as I left my job all the music came pouring out of me, I wrote an entire CD. I began to use all of my corporate skills to market, promote and brand that. I always had this other dream to put together an all female, all Italian comedy show. I began the hunt for my team. I found three other women whom fit the bill, “pardon the pun” and premiered the Italian Chicks show in January 2008 AT the Laugh Factory, to a sold OUT crowd.

Since then the Italian chicks have performed in Boston, Philly, Chicago, and continue to gain ground. Italian CHICKS is the newest, hottest comedy tour on the scene today. Part meatball, part cannoli. These women are sure to leave you wanting more… and we're not just talking about the meatballs! You’ll laugh harder than if you we’re drunk at an Italian opera.
A PASSIONATE COMEDY… WITH A LITTLE DRAMA!

I COMPLETED the recording of my debut CD of original compositions.
It was up and live on I-tunes and was receiving stunning reviews.

"She is a compelling, provocative and lyrical songwriter. Her MUSIC AND HER voice are a woven piece of velvet - RICH IN abstract hues of red.” the consummate musician, all music and vocals are written and performed by Maryann Maisano. "

Then my sister goes to a wedding and calls me whispering from the bathroom..
Hey, its me!
Yea- what’s UP?
I am in the bathroom at the wedding.
Yea and....
Danny Aiello is here. So I went to my car and gave him your CD and said. "this is my sister, you really need to hear her music!”

And wouldn’t you know it! He called me.

Danny Aiello – (THE ACTOR & SINGER ) is performing my song, City of Light” on his new CD – titled Bridges – due out in 2 months, along with a music video…

My Father gave me what I thought was a challenge when in fact it was his way of saying. "I really don’t understand this business of yours and I just want you to be OK." Everyday I look at his photo, touch his necklace and say, Thanks Pop.

My Mom always was and continues to be my biggest fan and supporter.

My siblings never miss a show!

And they are all part of the act because growing up Italian can really be that funny!!!..And ya know what? The humor is not about mob movies or gangsta’s. Its about LIFE, love and family. So you don’t have to be Italian to love the ITALIAN CHICKS! You just have to come from a passionate, dysfunctional family that loves ya….

I also gained 3 amazing sister’s who are in the show.
Mary Dimino, Carolann Valentino and Gina Scarda. That’s us, THE ITALIAN CHICKS!

I walked away from 6 FIGURES, took a huge risk and have never been happier…

Join our fan club on Facebook and LET US keep you posted on up coming events & shows.

This is brilliant! Great interview, great job, by two of my favorite Italian-American girls!!

Great interview of MaryAnn Maisano! We share a wonderful heritage of Italian women of love, labor, life and endearing personalities. Best wishes to the Italian Chicks and the Italian American Girl, and to my one and only daughter Melissa. Also, special recognition to Antoinette LaVecchia for her wonderful play, How To Be A Good Italian American Daughter.

Great write up! Funny, I'm Jewish but had the same grandmother (bubby), about 4 foot 10 at most, with the same braids. When her hair was down she looked like Cousin It, so cute! Continued success!