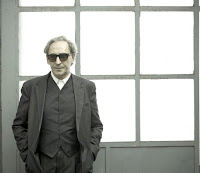 The award winning Franco Battiato is internationally regarded as one of the most original creators in Italian music from the 1970s to the present. Battiato's 1970s output embraced more electronic influences than his Italian prog-rock counterparts of the period such as PFM (Premiata Forneria Marconi) and found him opening European concerts for the likes of Brian Eno and Nico. Battiato's experiments in this arena culminated in 1978's "L'Egitto prima delle sabbie" (Egypt Before The Sands) which won a Stockhausen Prize for piano composition.

Franco Battiato's recorded career continued into the 2000's with a diverse range of collaborators including Simple Minds' Jim Kerr, Middle Eastern-Electronica pioneer Natacha Atlas and the great Argentine diva Mercedes Sosa. His body of recorded work consists of some 38 studio and live album releases around the world with compositions in Spanish, French, English, Arabic and Sicilian languages in addition to Italian. Battiato has also composed 3 operas as well as classical works for orchestra, ballet and film soundtracks.